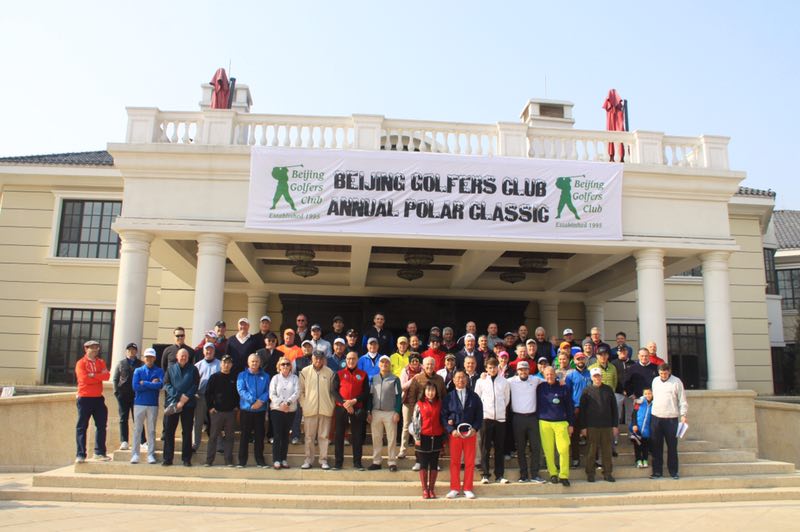 The Beijing Golfers Club is one of the oldest social golf clubs in China and has been operating on a not-for-profit basis since 1995.

The club was formed in 1995 by a group of dedicated expat golfers who wanted to make it easy to play golf in Beijing. This small band of friends rapidly expanded to a large networking group that was able to negotiate good deals with local Beijing golf courses to minimise cost and maximise playing opportunities.

The active membership of around 150 men, women and juniors is comprised mainly from the expat community and consists of a wide demographic of countries, careers and family backgrounds

Tournaments are held every weekend from March to November and typically attract 30-60 golfers. BGC provide transportation to and from the courses and arrange all of the golf activities, as well as providing prizes across several categories, from beginners to experienced golfers – making it very easy to play golf in Beijing.

At the end of every season the best players in the Club challenge each other for the title of Club Champion. This honour goes to whoever shoots the Lowest Gross score at the Club Championship and they are awarded the Henrik Lundsgaard Trophy, named after one of the founders of the BGC.

Hole-In-One
…what everybody dreams about but very few have or will experience – however there have been several in BGC’s history. Congrats to all those honoured below.

201X – Mimmie Broberg, Orient Pearl
2017 – Peter Wikström, Panshan on 9 September. Hole A6, 145 yards with a Titleist NXT.
2016 – Jan Roos, Grand Dynasty Hole #13 on May 23rd. 167 yards with his 7 iron, Jan dropped a Car-O-Liner Pro-V1.
2013 – Liu Jiangqiang, Orient Pearl Hole #7 on October 13th. 185 yards with his 4 iron, the ball went straight and low as it cut through the day’s smog. It landed in front of the green and rolled in.
2013 – Palle Jensen, Orient Pearl Hole #15. 186 yards over the water from the Blue Tees, using a 24-degree Hybrid and a Titleist Pro-V1. For this Monthly Medal event, Palle proceeded to win the first place trophy prize in the A-division as well as some valuable hole-in-one prizes from sponsors. Palle reciprocated, buying a round of drinks for all of the BGC members in the clubhouse.
2010 – Fredrik Ektander, Jinghua Golf Club hole #13, 16 May from the Blue Tees. Club used: Pitching Wedge, Ball used: Nike
2010 – Hughes Pavie, Beijing Golf Club hole 3, 11 April from the Blue Tees. Club used, 6 iron, Ball used: Titlelist.
2006 – Wylie Rogers, Beijing Golf Club hole 7, 153 yards from blue tees. This hole-in-one is the only recorded hole-in-one for the Beijing Ryder Cup. Despite this fantastic shot, the America Team still lost to the ROW team. Wylie did win the hole though.
2006 – Alex Cheng, Jinghua Golf Club hole 5, 132 yards from blue tees.
2004 – Ian Barnard, Beijing Country Club hole B8, 176 yards from the white tees.
199x – Marius Roest, Beijing Country Club hole E8 (at that time hole A8), 185 yards from white tees. Club used: Driver into a stiff breeze. Marius’ ball hit the top of the flagstick and dropped straight down into the hole. Jimmi Liu was in the same flight with Marius that day and Jimmi was so flabbergasted that he did not say a word for 5 minutes after the Marius’ ball dropped. The BGC Committee congratulates Marius on this unusual hole-in-one but considers the achievement to get Jimmi to shut up for 5 minutes to be a bigger sensation.
199x – Ken Cummings, Beijing Country Club hole B5 (par 4) 275 yards from white tees. In those days, hole B5 was a bit shorter at around 250 yards, nonetheless, this is the only recorded BGC hole in one on a par 4. Club used: A persimmon-headed 3 wood.