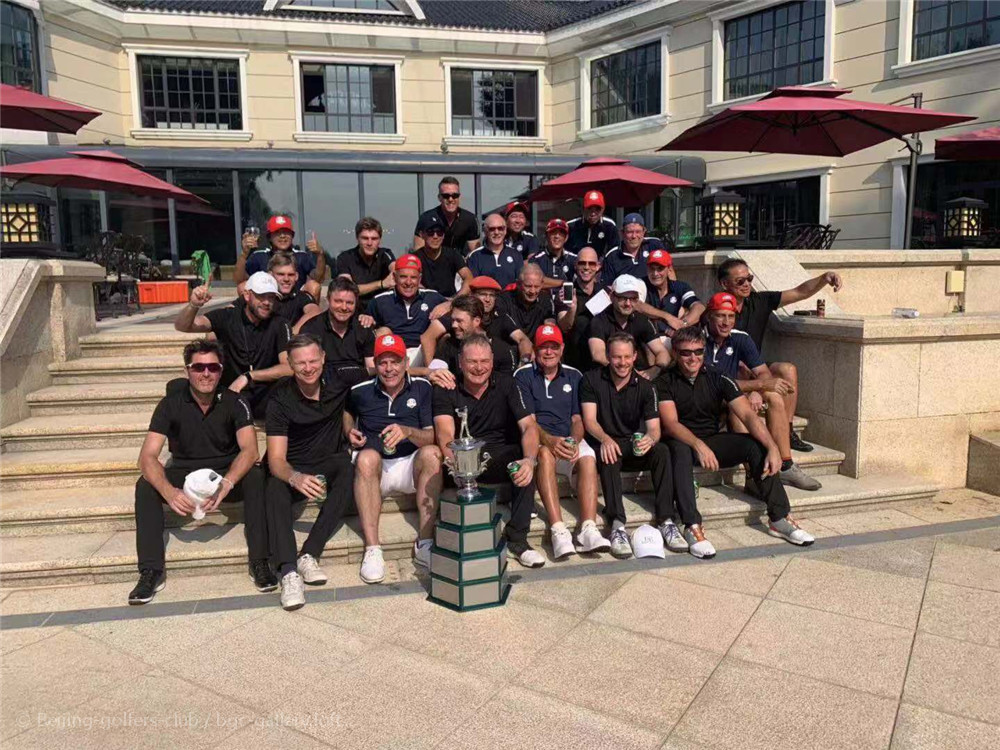 25 years ago a small but dedicated group of amateur golfers formed the “Sunday Golf League”, which by 1999 would grow to become what we now know as the Beijing Golfers Club.

1995 also marked the inaugural “Beijing Ryder Cup”, where fourteen-man teams from The Americas and The Rest of the World compete annually in a format that emulates the real Ryder Cup – with all the fun, challenges and pressures that come with it.

The Beijing Ryder Cup is a privilege enjoyed by only a few. For two days a year golf’s individual glory is set aside, with the winning team determined over three matchplay formats; Foursomes, Better Ball and Singles.

For the winner there is a perpetual trophy, honour and bragging rights; which is more than enough to ensure that whilst the tournament has a fiercely competitive edge, it’s always played within the finest traditions of golf and in the true spirit of friendship.

2019 marked the 25th anniversary of this coveted trophy. The success and longevity of the tournament is a tribute to the founders of the Club and all who have followed in their footsteps, a truly remarkable achievement for the fellowship of Beijing Golfers.

It has over the years become a prestige tournament where the urge to win is high. As golf is an individual sport usually rewarded after the principal “Less is better”, the Beijing Ryder Cup offers players to be part of a team, to play three different match play formats and all the fun, challenges and pressures that comes with it. There is no prize. There is no reward. To win earns the team member names on a perpetual trophy and nothing more.

Not everyone can participate. There are only 14 players on each team, but even if you do not play on a team, you can choose your team and go watch them battle it out over two days of intense competition. It all ends with a great celebration party. However, being a part of the team is a big commitment. The BGC does not contribute to the costs of the tournament. Players must be prepared to participate in practice rounds, and to pay for all of the costs of the tournament rounds, uniforms and associated events; these costs can be significant. It is a serious tournament and to be considered for the tournament the players must be just as serious about everything they do.

It is a great tournament and fun to be a part of even if you don’t play for a team. You can rally behind either the Americas or the Rest of the World, and root them on to win the Cup! Read on and see if you might be interested in participating either in logistics, playing on a team, or even just watching great golf played by other members of the Beijing Golfers Club.

If you are interested in being involved, as a player or otherwise, be sure to let the captains know.

Selection of Captains and Vice-Captains

The approved Captain will elect his own Vice-Captains and the BGC Committee will then also endorse the Vice-Captains. Refusal of Vice Captain candidates will be on the same grounds as above, however, this has not happened yet in the history of the Beijing Ryder Cup.

In picking the team players, the Captains must follow and abide by:

The Captains choose the team based on the potential to win. They will look throughout the BGC membership and based on how players perform in BGC events, and especially Match Play tournaments to determine if they are likely to benefit the team. The captains begin working on their teams late in the previous year and will start selecting potential players early in the season. Prior year players tend to be asked to play again, but this is not absolute.

As you can see there is no strict rule about which golfers are to be selected. As long as the player is eligible, the team captain has the discretion to choose players. At the end of the day, the Captain’s responsibility is to pick a team that he judges have the best possible chance of winning!

When picking the team players, the Captain must take responsibility to:

The Host team alternates every year. The host team Captain is responsible for:

The BGC Committee can assist the ‘host Captain’ with practical matters including coordination with the golf and dinner venues.

Takes place the last Wednesday before the Beijing Ryder Cup at a venue to be chosen by the hosting team. All players are invited and strongly encouraged to join. During the dinner, the teams will be introduced to each other and the competition draw will be completed